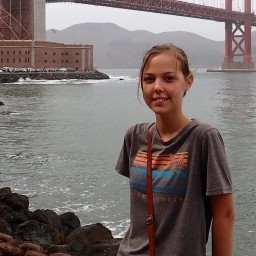 During our first years of travels, I never participated to the night watches. Initially, I was too young. Then, well, nobody thought about it. It’s not that I’m unable to do it. Of course I am! It’s just that it’s not so simple to change a schedule. Raphaël, Thomas, mom and dad have always had the same schedule.

However, during the passage towards San Francisco, ten days after we left Kodiak Island, my dad announced that Juliette and I would start doing night watches. We therefore had to change the schedule. My parents now had two hours less to do, which allowed them both to sleep one extra hour during the night. That made a good difference!

Since I was only a beginner, I only had an hour watch to do: from 9 p.m. to 10 p.m. Juliette did the hour before mine. Then she went to sleep while I stayed awake.

My first night watch was pretty relaxed. We were running the engine, the sky was clear, the sea was calm, and no other boats were around (it’s rare that we encounter boats so far from the coast). Dad gave me instructions on the functions of the AIS (a navigational aid that detects boats passing by at less than 15 nautical miles). After that, he went to bed. So, then I simply had to go outside once in a while to spot any lights from other boats and make sure the autopilot was working well. Thanks to it, we don’t have to remain outside all the time to steer the boat, so, we want to make sure it doesn’t crash and nothing damages it. I also had to check the AIS screen, to see if there were any boats around that I couldn’t see and to know what direction they’d be going. Night watches seemed pretty easy to me! Almost everything could be done from the inside. And when I went outside, I was protected from the wind and waves by the wood dodger my dad had built!

When I was a kid, I always dreamed of participating in night watches. I had many reasons for that eagerness.

First, I wanted to be useful too in this journey. The boys were the one hoisting and dropping the sails, working during the haul out, going out to buy some fuel, etc. When I wanted to help, my dad always said:

“The best way you can help is by taking care of the kids.”

And when I told him I wanted to hoist the sails, he’d answer:

“You aren’t strong enough yet, but sit here and observe. You will learn a lot that way.”

At the end, I got tired of “sitting and watching until I had learned enough.” My thirst for knowledge about sailing gradually faded. Now, I’m not interested any more. They just had to let me participate when I first felt like it. They missed a great opportunity to initiate me to sailing. Now, it’s too late! I’m better at taking care of the kids anyways! J

Secondly, I was craving to see the starry sky, the constellations, the moon rise, and flying stars. Mom told us so much about how beautiful it was. It’s not that I’m as interested as Juliette, but I’m still curious to see!

Lastly, I wanted to have a valuable reason for going to bed late. See, I’m the girl who starts a project and works on it nonstop all day. As I usually work slowly, I often haven’t finished my project by dusk. If I’m not done by the next day, you can be sure I will never finish it. I will forget about it or simply not feel like working on it anymore. Naturally, I don’t want that to happen, so I often spend the whole night trying to finish sewing projects, embroidery, macramé, paintings, writings, video editing, etc. All this without valuable reasons. The night watch therefore allows me to stay up fairly longer to finish my projects! I’m the only one in the family that keeps busy with arts during watches. So no one can really understand this last reason. Thomas and Raphaël usually view movies. Well, especially Thomas. When I was younger, I also wanted to do watches so I could view movies too! But as years passed, I got less interested in movies than when I was 10 years old! Besides, I don’t have the proper device for viewing movies in my bed anyways.

My first three night watches were pretty calm. There wasn’t any wind, so the engine was roaring. Also, we rarely encounter boats out in the middle of nowhere, so I didn’t have to go outside often (only every 15 minutes). However, weather can really turn drastically overnight! The fourth day in the morning, I couldn’t recognize the sea on which we were peacefully sailing during already two weeks. The wind was howling and the waves were huge. What a major spin! How can everything transform so quickly?

All day, the boys got in and out of the boat to maneuver and switch sails. First, there weren’t enough sails out. Then there were too many. Then they had to haul down a couple of reefs in the mainsail and set the staysail. In moments like this, I’m glad I haven’t learned to maneuver. I greatly prefer staying inside the boat!

That evening arrived too quickly to my liking. I had feared that moment all day. It was the first time I had to do a night watch in such weather conditions. I had no idea what to do if a problem occurred. That’s what stressed me the most. In the end, it would have been valuable that I learn a few navigational tricks… How can I know if the wind is still in the right direction and if the sails are adjusted well?

Before going to bed, Dad told me his instructions:

“Check the speed. If Pinocchio goes to more than 6 knots, come and wake me up. If there’s any other problem, go tell Raphaël. He will stay awake during all your watch time. Oh! And don’t go out of the cockpit.”

I crept up the stairs until my head touched the wood dodger above the companionway. I didn’t need to go any further to see around, because I saw through the windows. I carried out my first patrol scanning the horizon back and forth, searching for a boat light.

Negative. No boats around.

That was a weight less on my shoulders. Now I could observe the sea more attentively. The full moon lit the surface of the water, making it look even scarier! When it’s super dark, I don’t see the waves, but with this natural flash light, they were all visible! They were high, long, deep and full of whitecaps. The wind howled, the shrouds whistled and the sails were full. Although they were shortened to the minimum length, Pinocchio was gliding quickly on the raging sea. In any case, the moon light gave the impression that we were moving forward very quickly.

Normally, I would have been supposed to go out at 9:15 p.m., then again at 9:30. But this time, I was so focused on making sure the boat was going well that I remained standing in the companionway stairs during almost the entire watch time. The burden of my responsibility was heavy! I kept remembering what my father told me so often in my life:

“I’m the one making the decisions, because I’m the one bearing the responsibility.”

I understand what he meant better now. If something happened, I’d be the one held directly responsible… That’s another reason for me to beware and do my job properly!

There I was, gone in my thoughts again! But not for a long time! Pinocchio accelerated suddenly, pushed by a pounding surf! I quickly ran down the stairs in panic, grabbed the GPS with one hand, holding on the table with the other one. The device indicated 7.5 knots. “Should I wake Dad up? Bah! No! I’ll just wait a little while for it to settle. We’re only riding a wave.” I rushed up the stairs and stood in the dodger again. I carefully observed the water flowing on both sides of Pinocchio; it didn’t seem to slow down… I checked the GPS: 6.8 knots. Fairly good, it’s slowly decreasing!

A big wave came from nowhere and violently splashed the dodger’s window behind me. The noise it made caught me by surprise! I turned around so quickly, I forgot to hold on the companionway’s edges. Of course, it was at this very moment that another wave tilted the sailboat, so much that the side portholes touched the water! This leaning caught me by surprise again and I fell down the stairs. By chance, I was able to grab a hold; otherwise I would have fallen on the door of the parent’s cabin. However, as I stood up again, I bumped my head on the edge of the entrance and somehow scratched myself on little screw that had an exceeding length. Grrr! I had told them to cut that screw! I was really on the edge. All I wanted now was to finish my watch time and go to bed. But Mother Nature had decided differently.

Another wave came by behind and deviated the boat from its trajectory. Pinocchio didn’t have the right course anymore. The moon that should have been in front of the boat is now on the starboard side! My heartbeat and breathing quickened. I was in panic.

I couldn’t let the boat go on that way! But I didn’t know what to do!

I tried to reassure myself by thinking it would come back to normal soon, thanks to the wind vane. But my mind remained in panic. I went inside to check the speed. It was back around 6 knots, so that was fine. I went back outside very quickly to see if the moon was back to its right position. But it wasn’t. I kept my eyes on the moon through the starboard window during an indefinite period (time passes by weirdly in those moments). But after what seemed to be 5 minutes, the boat still had the wrong course. And moreover, the sails started shaking alarmingly. It was normal, as the wind wasn’t coming from the right direction anymore. I really felt we had to do something about it!

Before I closed my eyes, I gave a quick glance through my cabin’s porthole. You guess what? The moon was back to its regular position in front of the boat and we were moving forward just as if nothing had happened. Raphaël will think I’m crazy! He must have thought I was worried for nothing. Ah well, whatever! All I wanted then was to go to sleep! But my heartbeat made it impossible as it was still too fast. What an adventure! I had never realized how stressful it could be to do watches! I thought all I’d have to do was to check out for boats once in a while and spend the remaining time quietly doing hobbies in my bed.

Well, nope, it’s not always a piece of cake! But it’s an important task for our journey, and having the chance to do it was an honour for me! It meant my parents trust me! And now, I can also participate in the discussions on this matter in the morning. I’m really in the same boat as they are now!

You enjoy following us and reading our travel stories?
You can encourage us to continue this adventure by giving.

To receive our newsletter with new blog posts and special information!

Please log in again. The login page will open in a new tab. After logging in you can close it and return to this page.