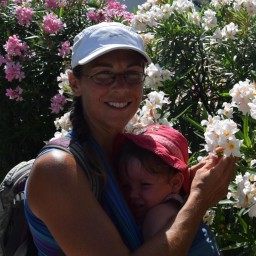 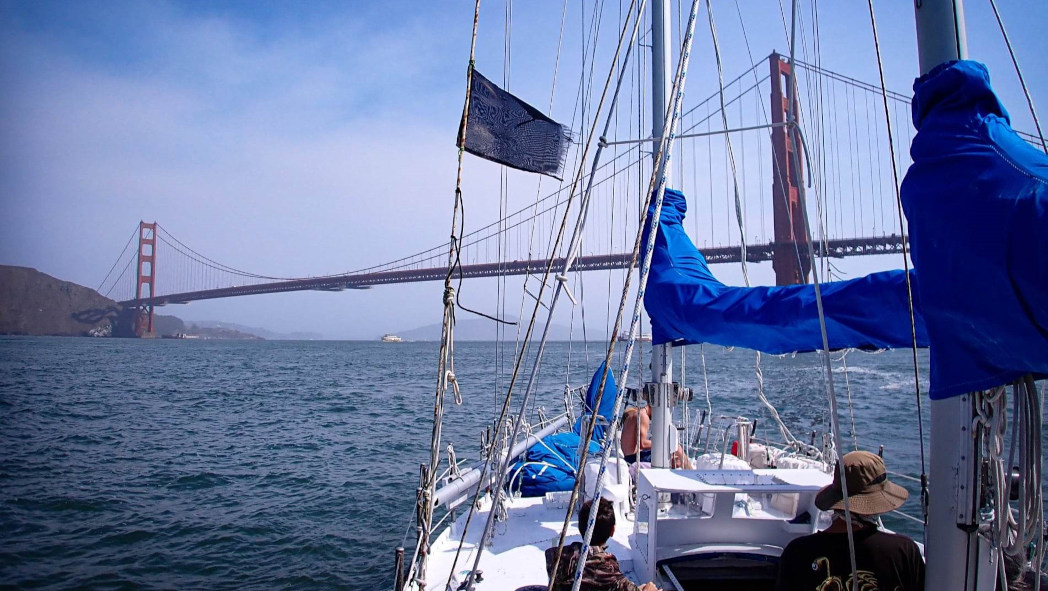 A hurricane raging on the West Coast of Mexico was promising to bring us headwinds, and forced us to head towards California, the “golden” state on the West Coast of America. The one all surfers dream of and all city lovers are fond of. I could already imagine myself tanning on the beach with a coconut in hand! “Get your bathing suits out, kids!” There was a palpable excitement in the air! Heave-ho! With a perfect wind on its quarter, Pinocchio was agitated, crowding every stitch of canvas he could. Brume wouldn’t sit still. Nobody could sleep….

Then, the wind dropped to a mere capful and a thick cold fog enveloped us. When the dawn of morning appeared, the boys dropped the anchor at Drakes Bay. “But where is the sun, the heat and the palm trees,” asked the kids? Seals came to greet us, indicating that the water was still quite cold down here… So much for my desire to dive in with a bar of soap!

Instead, I kept my woollen hat on and took advantage of this “brief respite” to tidy up the boat, do laundry on deck and clean up the holds and cockpit. The height of nautical luxury! We were alone in the bay and the body of water was calm as a mirror. However, the atmosphere onboard was far from being peaceful. The debates had already begun about whether we would visit San Francisco.

“We can’t travel so close to the Golden Gate Bridge and pass by without going,” protested the teens!

They had seen it in movies and were quite anxious to see it in real. For Marcus, however, it wasn’t as simple as it seemed. The current can reach up to four knots under the bridge. We really didn’t want to be there at receding tide… Imagine the scenario: going against headwinds and ebb current! And what if the fog didn’t lift, or the darkness of night fell before we’d have time to reach a safe place to drop the anchor? We’re not in Alaska where it’s bright all night!

“Stop pestering me with that, requested the captain. I’m tired and going to bed. We’ll see tomorrow…”

Honestly, it didn’t matter to me. I’m not fond of large cities! I greatly prefer uninhabited bays, the countryside or small towns where everything is accessible at less than half an hour walk. Yet, I wouldn’t mind having access to a nice library!

After a good night of rest, Marcus studied the tide charts, calculated the distance to cover and consulted the weather forecast. Everything seemed perfect.

“Get up, boys. Time to lift the anchor… Girls … whose turn to place the chain?”

The joy was back onboard! After five hours of sailing, we finally saw the Golden Gate Bridge emerging from the fog, supported by its enormous red piers. It was quite impressive to see its deck suspended right over our heads! Not to mention the old prison of Alcatraz! I understand better why it was dangerous for the prisoners to attempt an escape. With this strong current and cold water, it was almost a sure death. We finally reached the restricted entrance of the Aquatic Cove, this little circular bay where we dropped anchor in the heart of San Francisco. Every day, hundreds of swimmers would pass by the boat, swim all around the bay and even race in the weekend. The dark and cold water didn’t seem to bother them. Some even dared venturing in before dawn with a spotlight on their swim cap or pulling a dry bag with a light inside. I really love swimming. It’s my favourite sport. But swimming here didn’t seem appealing to me at all! Oh, how I miss the Marshall Islands! I could spend hours exercising as I explored the coral reefs in the atoll’s lagoon. It was like swimming in a giant aquarium filled with anemones, rays, turtles and fishes! “Hello, Miss Octopus!” “Respect, Mr. the Shark!” “After you, Mrs. Jellyfish!” Of course, it was risky at times, but how lovely!

But here, it’s on the road that we must be wary of threats! We faced a cultural shock when we saw countless numbers of electric devices with little red lights rolling down the street full speed: skate boards, scooters, mini cars, bikes, weird stand-on gismo with two wheels… and even ancestral electrical buses. We really felt like if we were travelling back in the past or in the future! Unfortunately, this dynamism came with an economic and social imbalance. While most of the infrastructure and buildings were luxurious and seemed used by affluent people, an unbelievable number of homeless vagrants roamed the streets and prowled the parks. It was sad to see, but it also felt awkward. I saw things that can’t be told.

Anyway, this nice large city had beautiful libraries and lots of touristic attractions. But really… I wouldn’t want to live there. By the end of the five days allowed in the Aquatic Cove, I was glad to move on and sail to Halfmoon Bay… The anchorage in Pillar Point Harbour was well protected from all winds. As we approached the entrance, we were greeted by hundreds of pelicans flying in all directions, diving for fish and stretching their long neck to swallow their catch. Our amazement was absolute until it was suddenly interrupted by a general exclamation of disgust! A horrible smell drifted towards us as we passed by the breakwaters! Then, we realized they were completely covered with pelicans … and pelican’s poop! Oh dear, did it stink at times! But our week there was great and we met lots of amazing people!

First, we met again with our friends from the sailing vessel Mandolyn. Yes, the ones with whom we had such a great time on the West Coast of Canada! What a coincidence! Then, we had a surprise visit from the Bleu Nomade crew. They happened to be camping in the area on their school bus furnished as a camper. We had a memorable time with this family from Quebec who has been very generous, offering a ride in town for laundry and groceries! That’s really appreciated! They know what it is to travel by boat, having spent a year in the Bahamas with their sailboat Perla 7, the same year we sailed to the Azores in 2016. Charlotte and Juliette were thrilled to meet up with their four teens and build friendships with girls their age! It feels great to spend some time with people from back home, to talk about life in Quebec and speak with the same accent! It brings a wave of homesickness! Sadly, the time spent with them has flown by too quickly. Our farewells were long and friendly. But who knows? We might meet again somewhere in Mexico! In 2021, when we arrived in British Columbia, an old friend from school wrote a message to Marcus to get him in contact with Simon, a fellow preparing his sailboat for a long trip and who had a few questions to ask. He was planning to sail around Vancouver Island with his family during the summer, so we expected to meet them somewhere in a bay… Unfortunately, we were never able to catch up with him. He was always somewhere ahead of us. It ended up he was the one answering our questions about the anchorages around the island! Still, we kept contact during the winter… In spring, he undertook sailing down the West Coast of America. Will we ever meet him one day?

When we arrived in San Francisco, we found out he wasn’t far, but still and always ahead of us. One might believe he was trying to avoid us!!! Against all expectations, in San Luis Obispo Bay, we finally had the chance to make acquaintance with sailing vessel Renard’s Québécois crew with whom we had been communicating on social media since more than a year! It’s great, for their two kids are the same age as our two youngest, Alice and Florence. It was so special to be with them after such a long virtual presentation! We were pleased to continue our way towards Mexico with them. Plus, in the Channel Islands, we met the Mandolyn crew once again! Those moments with boat friends are very precious, a big plus for all the family. It brings friendships for the youngest, diving or hiking companions for the eldest and great moments for everyone.

During their hikes, the kids had the chance to encounter sea lions and sea elephants! One afternoon, as we were preparing a dinner with the Renard’s Crew, Marcus noticed that a catamaran was moving in an unusual way. Faithful to himself, he took his binoculars and looked at the situation more attentively. Indeed, the boat was drifting away and nobody was onboard. Was it dragging its anchor? Marcus quickly prepared a chain, a rope and a spare anchor. He then left with Thomas so they could try to secure the catamaran. Simon, Renard’s Captain, went with them to help out. When Marcus finally tried to lift up the anchor, he realized the line that was supposed to secure the boat was cut. Nothing was found at the other end of the rope. Oh no! That’s not going to be easy! To know more about this story, read Thomas’s article:

In the end, we left these beautiful islands behind us and made a last short stop at Santa Barbara where we resupplied the boat before sailing down to Mexico. It won’t be a long passage, but still. Many trips at the grocery were required, with very full backpacks. We have a weird look with those old backpacks, and the fact we were buying so much food leaded people to confusion. They somehow seemed very surprised to see our long procession marching down the streets where everyone usually travel in luxurious cars and wear high heels! A genuine wealthy city! It reminded me the soap operas our aunts used to watch on TV!

Well, here is. We hadn’t considered doing all these stops on the West Coast of the USA. But in the end, it was very pleasant. We encountered cheerful people and made extraordinary discoveries!

Next stop: Ensenada in Mexico!

Here are short videos edited by Charlotte showing her hikes in the Channel Islands and the resupplying of Pinocchio in Santa Barbara!

You enjoy following us and reading our travel stories?
You can encourage us to continue this adventure by giving.

To receive our newsletter with new blog posts and special information!

Please log in again. The login page will open in a new tab. After logging in you can close it and return to this page. 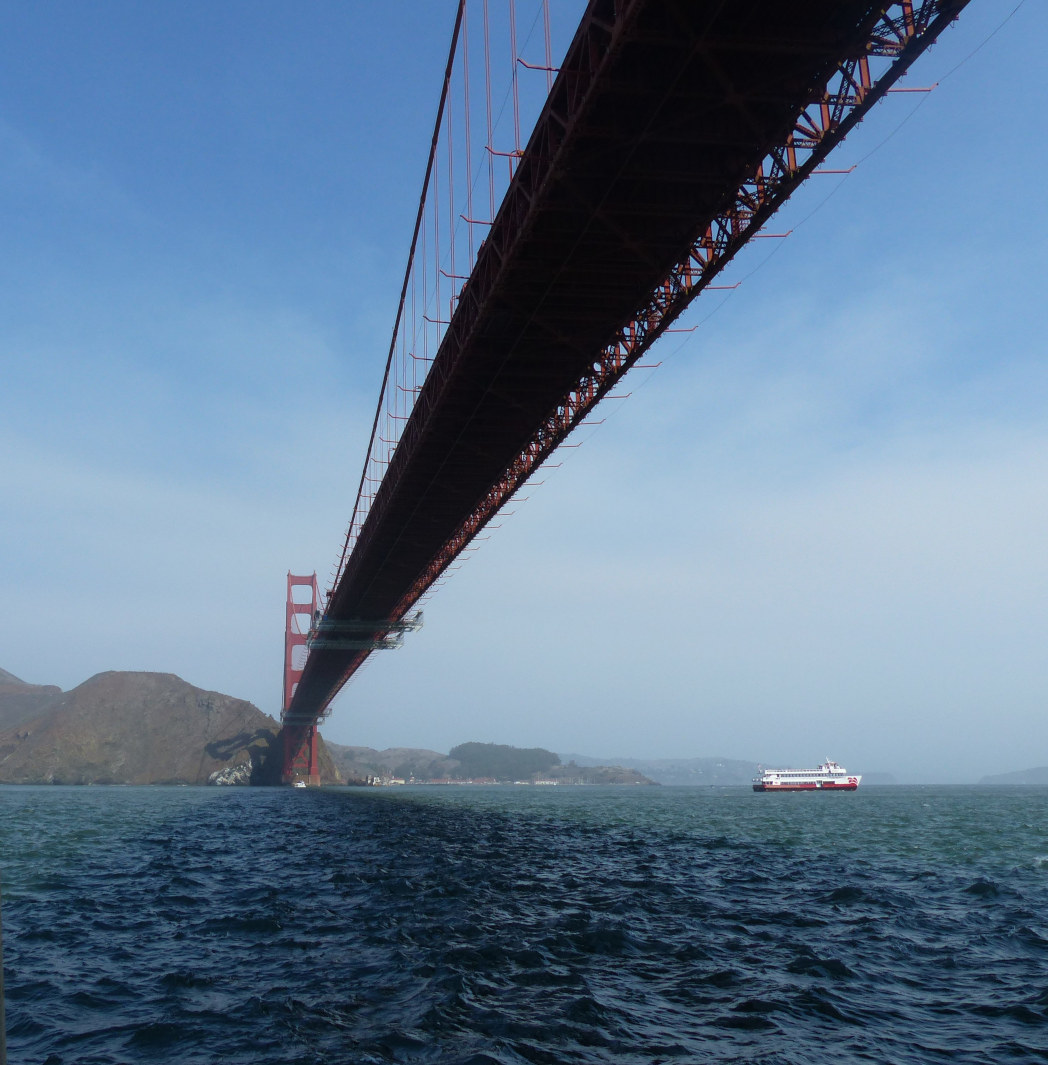 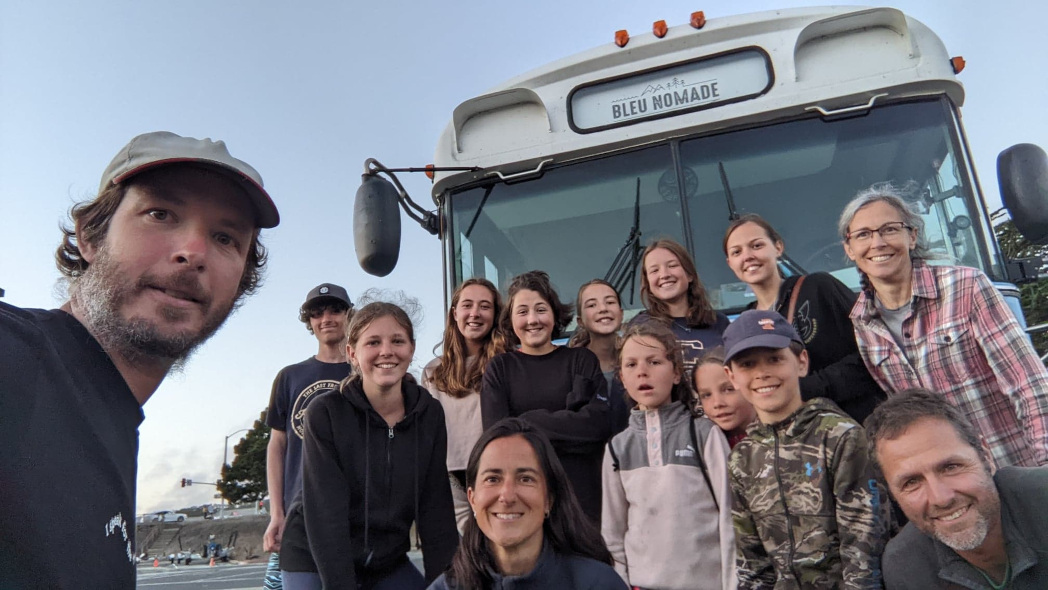 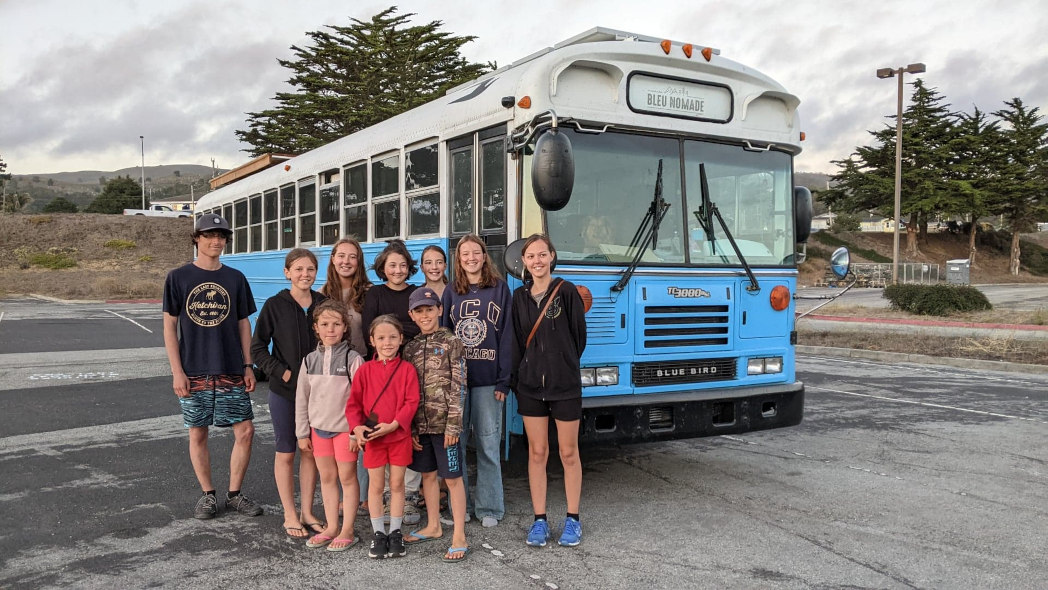 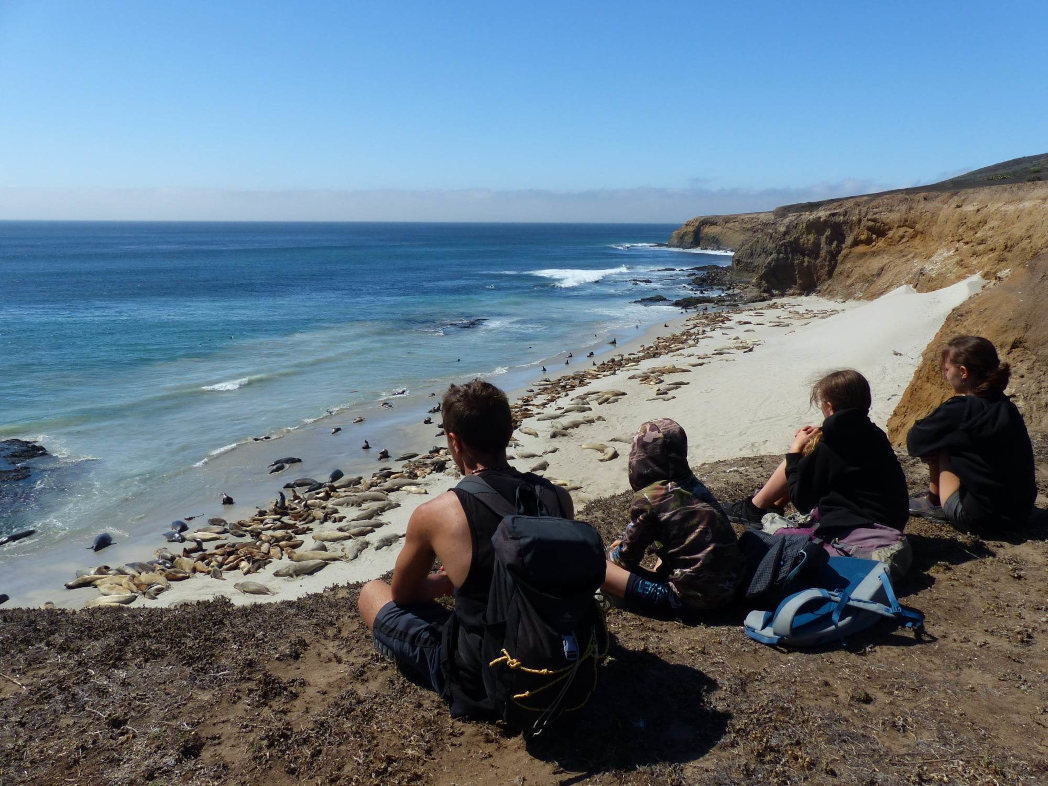 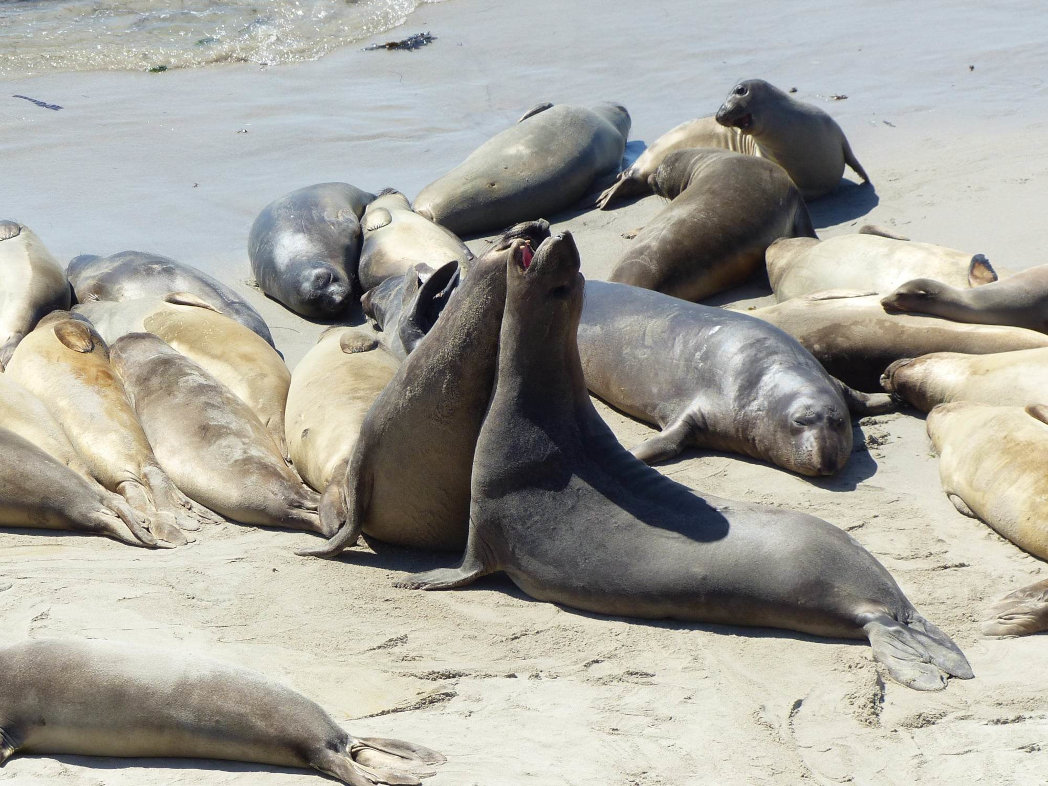